Life Gets in the Way

Oh dear, the babysitter's son has foot-mouth-hand disease...something I had never heard of before when my children were young but evidently has been going around. So Jacob has been spending a lot of time with his grammy and granpa...but mostly grammy! So, of course, not a lot else gets done!

I do have a couple of pictures to show you though. 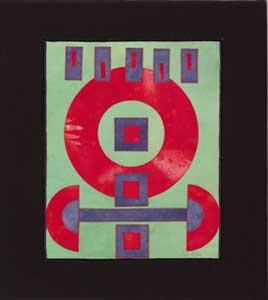 This piece was cut off in the article in Quilting Arts magazine which was created to show formal balance. I really like it and had a lot of fun doing it as I don't usually work in this way. I much prefer asymmetrical balance but once in a while it is good to do the exercises and work with something different. It is done in a triadic color scheme.

And this is Canyonlands. I think I had shown it before but it wasn't really finished. I added the purple and then mounted it on stretched black cotton duck and did an uneven satin stitch around it to set it off more. 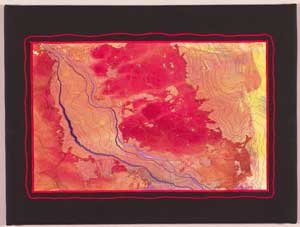 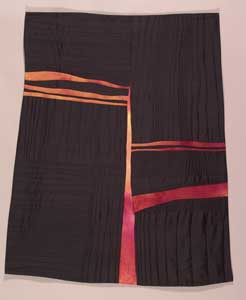 And this piece is my favorite. I actually pieced it...not fused!

I used Thai silk for the black and then some of my hand dyed silk charmuese...the quilting lines are hard to see but are really neat with lots of lines adding to the composition. Each black block has its own lines...

Well, got to get going on working with some more running fence stuff. there will be a show coming up with work from all of us who are working with it and I want to get a couple of pieces done to include with the two that are already with Dianne.

Meanwhile, I've had a blast discharging cotton. Will show you shortly.

Yes I like the black one too...you are amazing ... you can take something fairly basic and turn it into such a beautiful piece of art...I wish I could see the quilting lines better....good work...and with a toddler around as well!!!

Hi LizzieB. You've been busy and productive and I've finally caught up with all your work on the blog. Yummy, as usual. Life does get in the way of life, doesn't it? Off to Asheville to teach and then to Fla. to deal with my mother's situation. I plan to print lots of fabric while I am there for 2 wks.

I love looking at art quilts, especially when I can read the artist's inspiration, methods, etc. Thanks for the show.

Liz...love the black piece..very dramatic!!! As usual you are a busy bee, keep on pumpin' them out. Looking forward to our mentee gathering July 10th..it's been a while and am anxious to catch up with everyone. Louise

wow! hadn't had the chance to check in for a while and boy have you been productive! this pieces looks powerful....i'm sure its 10 times more wonderful in real life

The black quilt is simply stunning,