Interesting art in the art world

I want to spend some time talking about the SDA/SAQA conference and what came out of it...however, as a direct result of that, I found some interesting information about current "textile" work...ie., tapestries.

I was looking through my Art In America magazine from January (I am sometimes slow) and on the first pages was an ad for "Demons, Yarns and Tales...tapestries by contemporary artists" at the James Cohan Gallery in New York.

Wow, tapestries in New York?  Went to the website for the gallery and found a show of a number of pieces of tapestry but then in the descriptions I realized that these were sold in editions of 5...meaning that five exact copies were available for each of the pieces...how can this be for original work?

I found nothing in the gallery information about how these were made or exactly what they were. So I went to the artist's web sites and found their paintings but no tapestires...none of the artists actually worked in fiber.

So then I went to the small print in the ad in Art in America and found out that the exhibition is curated by Banners of Persuasion.  So I went to their site and found all the information I would like.

These tapestries are actually rugs that have been made under the artists' supervision in China....talk about outsourcing! This company, Banners of Persuasion puts together shows of various artists with work that has been recreated from paintings and then they are sold at very high prices...if you read the article you will get a sense of the price of these.

So where is the orginal fiber art?

Previously I had found the art of Sati Zech who is represented by Howard Scott Gallery, also in New York.  Take a look at her work. This is fiber art done in a very different manner.  She paints on canvas and then puts it all together via sewing....

So, all this will lead to more discussion about the conference but please take a look at these artist's work to see what is happening in the galleries in New York!
Posted by lizzieb 4 comments:

Were you left hanging?

I just returned to post about the SAQA/SDA conference the past two days when I realized I left everything hanging with my last post.

Thank you everyone who offered to let me use their photos.  I had a great time looking at other peoples works and finally came up with an image from Carol Suto, Hannelore Nunn, and Linda McLaughlin.
I enlarged the images so they would show up easily on TV, and then created 2-3 small quilts (11 x 14), using fusing methods that were inspired by the photos...in one, I took it fairly far along in the abstraction, three were made from Hannelore Nunn's picture of trees next to a lake in Scotland with mountains in the background and changed those quite a bit with color and style. It was a lot of fun to do.

I got to watch other people who were there for taping while they were taping by sitting in the green room, which had lots of space for setting things up and getting orgainized. There was also lots of food available. I had completed several step outs for each picture (only one quilt per picture) in order to show how it is done. This is a piece in the 600 series of Quilting Arts TV and will be out in June, I think.

Pokey also asked me to do a "can this UFO be saved" segment, looking at four quilts that people had started and then were stumped on. They are all posted on the QA blog and are fun to look at. People can comment about them and I think 12 were chosen with Terry Grant doing some, I did some and I don't know who else did them. 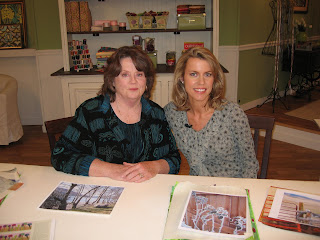 Had my makeup done professionally...for TV which is very different. The woman first put white every where on my face that wasn't light...under the eyes, around the nose, around the eyes, where wrinkles are, etc, and then started adding color.

After the taping and lunch, I drove around the area and wandered around taking pictures of trees in the snow. 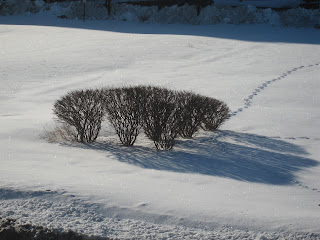 I had dinner that night with Susie Monday who had been there to tape her segment and also to do a video workshop...what fun that would be. 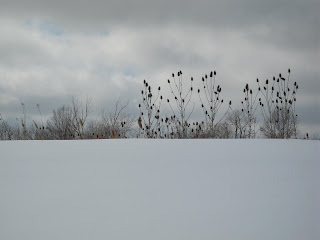 Pokey and everyone was just delightful and really put us all at ease. Pokey, of course, it the absolute professional and makes it so easy to look good!

The next day I wandered over to the small town of Chagrin and took pictures of the waterfall in the middle of town and the frozen parts of the waterfall. It was fun to just wander around and I shopped for
old photographs while I was there. 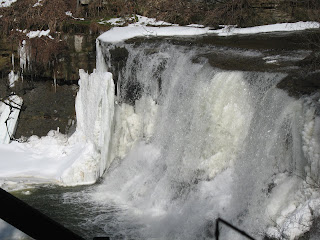 Then off to the airport for my flight to Chicago which then got delayed in Chicago for an hour but somehow I made it home only half an hour late.

I have been busy since then...various stints at babysitting...including being at my daughter's at 4:30 am so they could take Jacob, the 5 year old, off for a day of skiing. Ashton and I had a fun day together with his gandpa coming in to help out so I could do a little business. 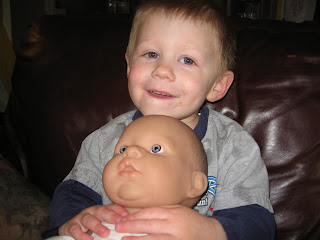 It's been hectic. I have gotten new work photographed, and have been busy resizing it and getting ready to upload it to my website which has been neglected terribly. I have a lot of catch up work to do on that site!

And then the past two days at the SAQA/SDA conference which I had hoped to talk about today but found I was too far behind to do so...so you will have to wait a day or so for all of them.
Posted by lizzieb 2 comments: