So here you go with a new series. These are all done on canvas and are not quilts. I don't even think that I want to use batting and quilt them...I am thinking about just mounting them on mat board for framing. The canvas has been painted and stamped with found objects like a test tube holder, the back of a cutting board, etc. The white background fabric with the blue and green is a monoprint that I cut up. I then added the turquouise and red to add some jazz...you know, there wasn't enough color. These are all (6) about 8.5 x 8.5. I love the way the color pops...unfortunately I took with pictures without proper lighting so have to get them off to the photographers for righteous photos! This one is Around and Around 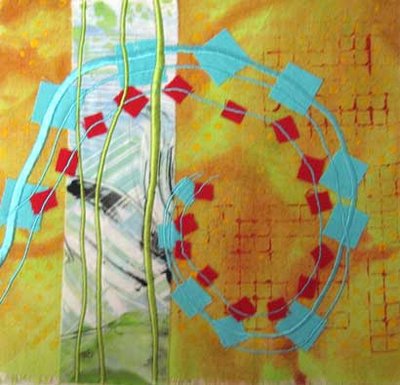 This piece has a yellow piece that had been dyed and then discharged using found objects for the stamping of Sunlight dishwasher detergent. I also had found a neat hot pad that is flexible and had the wavy lines... 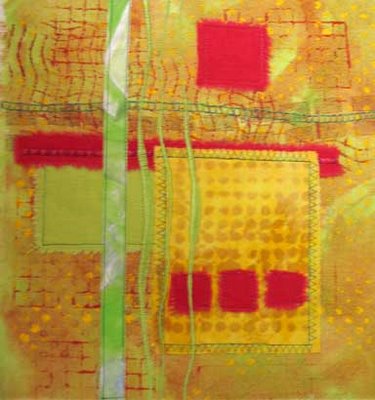 And in this one I started stamping on the black fabric and also used another monoprinted fabric that I had cut up to make postcards with (the green piece) which is also canvas. I used a bunch of my hand carved rubber stamps made out of erasers. 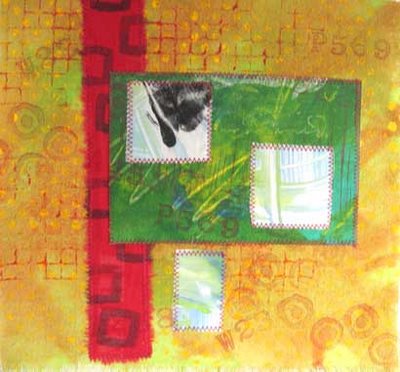 Sorry, this one is really out of focus...I must do better but I really like it and wanted to show it off. It has three red small sqaures on the rust and in person the color is fantastic. I also did a bunch of stamping on this one, too, both with found objects and with some of my hand carved stamps. I did all the painting of the background fabrics at my dad's house when he was sleeping...got about four good size pieces of canvas painted. Then when I was able to come home for an overnight I spent one day doing monoprinting and the next day discharging my fat quarters that I had previously dyed. 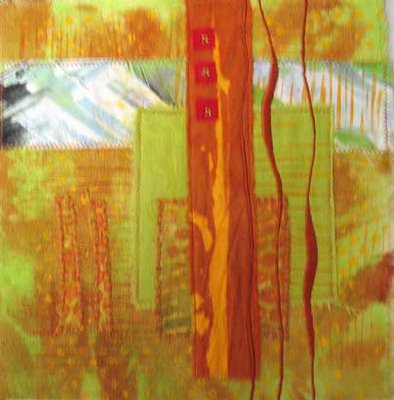 And this is the first one that I did when I was at Asilomar last week. I did all the stamped while I was there, usually after I had cut up the piece of painted canvas to the size I wanted...well, more or less wanted. 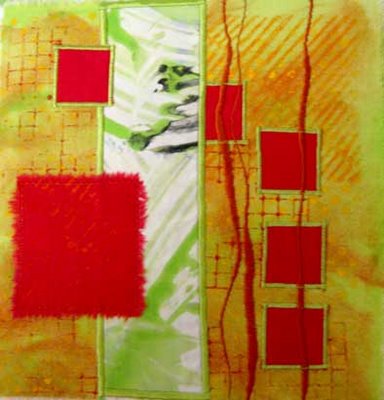 And finally, the last one of this series. I had only brought some variegated thread with me as I really didn't know what I was going to do with the canvas and the monoprints and the discharged stuff so a big storage box of acrylic paints (brought the tubes because I could bring more for the space) and all the printing stuff (well, not really all since I left all the silk screens and tons of stamps etc at home) Then I just decided what I wanted to do and had at it. 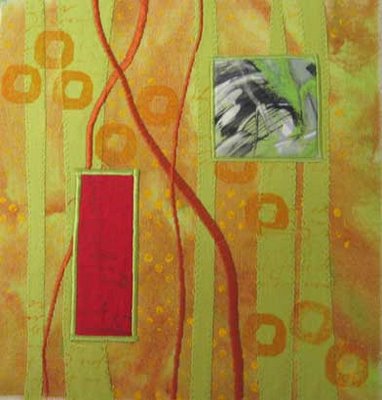 I did three of another series but these were the last that I did while there. They are bigger, I'd say, without measuring them that they are about 12 x 18". I had gone to Back Porch Fabric in Pacific Grove and found this red and black and gold Sherrill Khan fabric which I just had to use. I also decided that I needed some black and white so bought some PDF white fabric, and used sumi ink to write on it and then cut out parts that I wanted to use. It is so much fun to determine what you need and then to create it yourself when you need it! 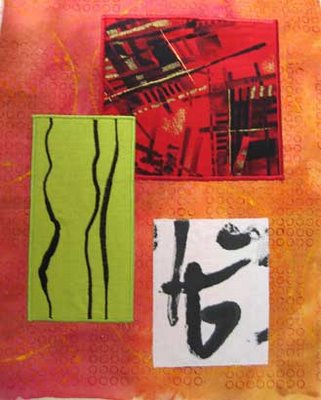 I call this one below my Aspens...really fences with squares but squint your eyes and pretend that you see fall colors...of course, I know aspens don't turn red but they do turn every color of green and yellow....not that I have any yellow in it either. Come to think of it, why do I think of aspens when I see this? Again, some of my balck and white fabric, carved erasers, satin stitching, etc. 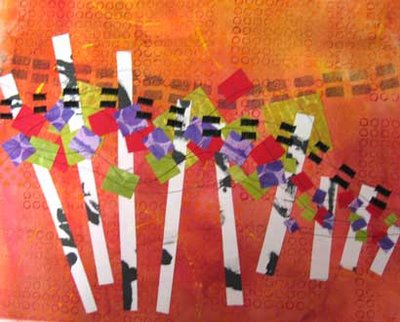 Now this one I just love for the utter simplicity. The dark fuschia fabric is dyed and then monoprinted with lots of texture. The green circle was dyed and then discharged and then you have my black and white pseudo characters. And of course, the background canvas which is painted and stamped several times. It looks great either in a verticle or horizonal orientation. 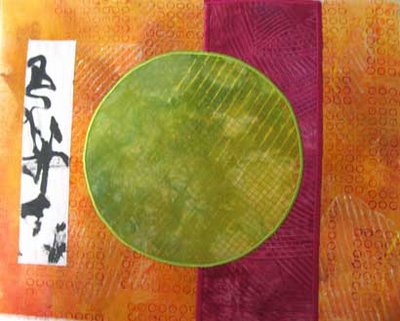 I went over to see my dad today, to collect bills, take him out to the grocery store and to get a power of attorney signed and noterized...another step away from his independence...this is really hard but not as hard as watching him almost die. Then went to the back and opened up on-line access to his checking account. When through a lot of stuff and he and I shredded a big bag of papers and old bills.

Felt like I have accomplished alot and felt good to be able to leave. I told Saane that I really appreciated her being there, got teary eyed and headed off to the freeway.

Two miles down the freeway the traffic came to a quick stop and I didn't...my car is now totaled. My seat belt kept me in my seat but I now have a huge black and blue bruise across my boobie. My back muscles will be sore tomorrow. Had the car towed, after a nice CHP took all the information, and then Doug and I went out for Chinese food. Came home and I got into our huged bathtub with the foot massagers, brought my Nano and Bose speakers in, had a small glass of Streaga (an Italian liquour) and relaxed in the hot water for half an hour. Feel much better but know I will hurt tomorrow! Oh well, didn't get any cleaning up done in my studio today...but there is always tomorrow.
Posted by lizzieb 7 comments:

These are the pieces of mixed media that I did at my dad's house.
I worked on these usually in pairs as I needed to let each layer completely dry before I did the next one. It was low stress and yet I felt like I was accomplishing something. 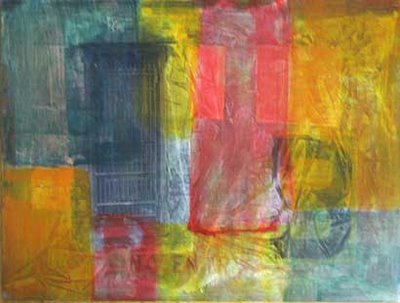 This piece is No Entry as the door has a heave grill in front of it...really looks like a jail cell. 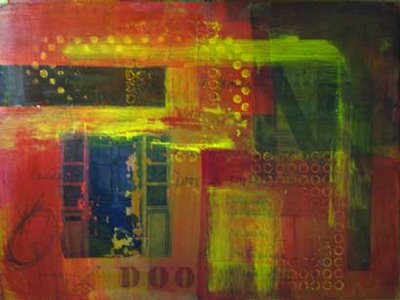 This is actually the first door...simply called Door. 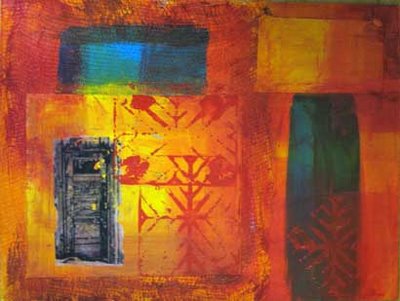 And this is Painted Door.

The doors, which have been transferred from inkjet images of my own photographs. 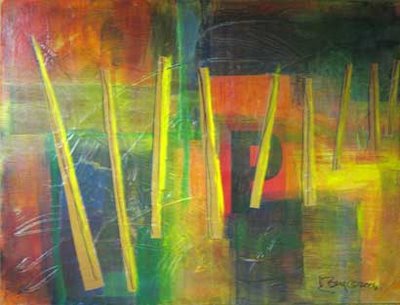 Somehow my fences creep back in to almost all of my work. These two pieces were the first that I did, about the second week while I was at my dad's. Sorry about the glare...these are all acrylic, papers, and image transfers from my own photographs. 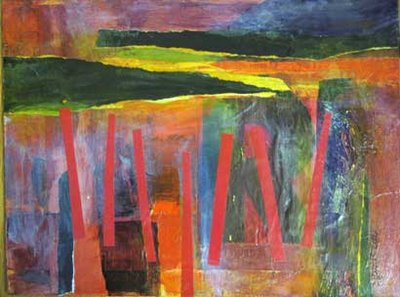 It has been a very eventful two months.

My father had gone down to 117 pounds, was sleeping 20 hours a day, and was barely drinking anything and wasn't eating anything. After a lot of hard word and two weeks time, I was finally able to get him on to Hospice. The nurse came, verified that it sure looked like he was fading away to nothing but had no diseases or illnesses. He was put on an antibiotic for a cough that he had but his lungs were clear. I had moved in to his home immediately and began the round the clock watch. My husband and daughter and her family would come over to visit and to keep me cheered up...when we weren't all going through greif and crying!

But something happened. Dad started to eat again. And does he ever eat! He has been out of bed for the entire day for two full weeks now, eats at the table, consumes large amounts of food which has made me feel like a short order cook.

For breakfast he will eat a bowl of cream of wheat, two scrambled eggs, a banana and an equal amount of cataloupe, a glass of V8 juice and a cup of coffee. Then he has a snack before lunch at which time he eats an entire sandwich, chips, soup, and some more fruit. And then he nibbles all afternoon, on grapes, oreo cookies, oatmeal cookies and whatever else he can find. And then for dinner he has his meat, salad, vegetable, and starch and then has ice cream an hour later. Three hours later he is now eating half a sandwich as we are trying to get him to sleep through the night. For a while he was consuming a gallon of V8 juice a day....that's a lot of red stuff.

However, what we are noticing is that his health is improving and he isn't dying right now but some serious demetia is setting in and we can watch it get worse and worse daily. During all the time he slept in bed, he detoxed on his alcohol and no longer drinks. Now he wanders around with an unlit cigarette and handles it, puts it in his mouth but doesn't seem to remember what else he is supposed to do with it...which is fine. We have now hidded the cigarette lighters from him and he is quite happy...we just keep him eating. Obviously this has become a very oral kind of fixation.

Three weeks ago I found a care taker who came in several days during the day...the first time I got out of the house for more than just grocery shopping!. We then tried some overnights and as of yesterday, she is full time. Dad really likes her and jokes a lot with her. Saane is Tongan and is absolutely wonderful with him. Her husband comes over if she has to run out and he talks football with my father. The other day my dad watched two baseball games...he has never watched baseball before! However, his eye sight is getting worse and worse so he can't see much of the TV and his hearing is horrible so he plays it pretty loudly, either in his room or in the kitchen which is where he spends most of his time. He has the chore of going down two flights of steps to get the newspaper in the morning and then later in the afternoon to get the mail and is getting much stronger.

It is really strange to see this man, who two months ago was a skeleton, now with a little round belly.

I did some collage work while I was staying there and will post it probably later or tomorrow.

Last week I went to Asilomar with a group of women from Roseville Sun City and from my area...no classes, no workshops, just five days of doing our own work at our own pace. I had a meltdown from all that had been going on with me but it was much needed.

I was able to do two and a half small series works which are different. I had painted canvas while at dad's and then on short trips home I discharged fabric I had previously dyed. So I took that all with me, my paints and some stamping things and created.

I am now in the process of trying to get my studio sorted out. There has been too much grab and dump going on...it is an absolute mess so I am trying to spend a couple of days taking care of that so I can start doing some serious work.

In November I will be at ArtQuiltTahoe and will get to spend a week with Gerrie...and doing a lot of work!

Yesterday I received a phone call from Empty Spools Seminars...they have booked me for March 2008 for artist-in-residence. I also have another booking for a retreat in 2008 and will get that info out before long.

And then, Virginia Spiegle and I are going to Kerry Bresnahan's retreat for a month in January in Texas....what could be better!!!!
Posted by lizzieb 6 comments: