The end of 2010 has come upon us. There are so many things I wish for, not for me personally but for the entire world.

I wish that everyone who could would give something to end world hunger.

I wish that everyone who could would give something to bring infrastructure to third world countries so they could have fresh, clean water and sanitation disposal.

I wish that we would all learn to appreciate and respect our differences and live together in peace.

I wish that we would all do what we can to help take care of our environment.

I wish that countries could be at peace.

I wish that children were never killed in violent acts.

I wish that we could all see beauty in our lives and take time to appreciate it.

May you have a happy new year and may 2011 be a happier year for everyone on this earth.
Posted by lizzieb 1 comment:

Another Day in the studio

Some time ago, Virginia Spiegel asked me if I would like to participate in a one day auction of collages to again raise money for the fight against cancer. I have joined her campaigns many times either by creating postcards or collages (last year) so of course, I said count me in.
So today I finished them up and now will be sending the photos off. Save this date and information:

One Cause, One Wednesday, One Hundred Collages
One Cause – The Fight Against Cancer.

One Hundred Collages – Created for this event by an all-star team of artists: Natalya Aikens, Pamela Allen, Laura Ann Beehler, Liz Berg, Pokey Bolton, Laura Cater-Woods, Jette Clover, Jane Davila, Jamie Fingal, Gloria Hansen, Leslie Tucker Jenison, Lyric Kinard, Jeanelle McCall, Linda Teddlie Minton, Karen Stiehl Osborn, BJ Parady, Judy Perez, Cynthia St. Charles, Virginia A. Spiegel
The goal – Raise $8,000 for the American Cancer Society in just one day. More details and a preview of artwork: http://bit.ly/ciJ0TN
I thought I would show you one of the five collages that I have completed for this event. The series is called "Yellow Circles". It is approximated 7" x 5" and is mounted on 10" x 8". 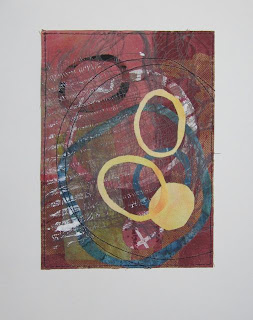 This is Yellow Circles 4
During this past summer, after my return from Switzerland, I began working with commercial felt. It has been very rewarding for me as I have done a number of different things with it. Some I have shown on Face book as they were done. I purchased industrial felt in a couple of different thicknesses and also had some circles punched for me and bought grey waste felt, that left over after punching out gaskets and things. This image is one which is a piece of commercial felt with some of the circles I had cut which have been needle felted onto the background felt. Then I took a piece of the grey waste, cut it to the shape I wanted and couched it down. It is far too dense to needle felt. I am now working on a very large piece that has this same waste and is being stitched by hand onto a large piece of 1/4" felt that is about 70" by 36"....this will take some time! I am glad I am working on this in the winter since it sit under the heavy felt blanket while I stitch! 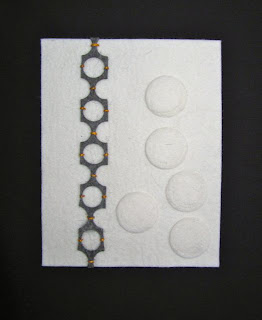 This piece is not very large and will be mounted on mat board suitable for framing. It should be placed behind glass to protect it from dust. Since it is felt, it has an affinity for any stray pieces of almost anything.
Posted by lizzieb 1 comment:

where you have been, Liz?

It has been six months since I posted.  I have been doing art work but not a lot.

During the past year and a half I have served as Rector's Warden at All Saints Episcopal church in San Leandro, which I have attended for the past almost nine years. I stepped in to fill in for someone else. I have done this job before and it hasn't been too bad....regular visits with the priest to discuss the parish, plan making, etc....leading the vestry...all that kind of stuff. Well, six months ago, after a lot of on again-off again decisions, my priest decided that he was indeed going to take a three month sabbatical after a month of vacation, meaning he would be gone for four months.  The planning before hand took a lot of work and dealing with everyone's anxiety about his being gone was hard. But, here we are, just a little over a week before he returns to the church and less than two weeks when I will be relieved of my job completely as I will be going off of vestry. While he has been gone, I have been in charge of things...of course we have had an interim priest with us but she has only been handling Sunday services and any emergencies. I have gotten all the rest.

As I realized that my time was coming to an end, I started to relax and it wasn't until that started that I realized that I have been somewhat tense and stressed during some of this time. Nothing serious but enough that it was interfering with other parts of my life...mainly my art. So I did a little bit here and there, made some baby quilts that still aren't finished and just fussed around.

A couple of weeks ago I traded some rubber stamps (well, a lot of rubber stamps) to a friend for her 48"x18"x72" shelving unit. My husband gave me a hand putting it together and the next day we were back at Costco to get four more. By the time we had finished putting the last one together, we had it down and worked as a team. Then came all the rearranging which meant that heavy bins had to be moved around and we decided to change the layout of the wooden shelving units that my husband had made for the studio some time ago. Two of them came up front and make a nice display shelf for art work as well as a good place for me radio and ipod player.  The other four were stacked one on top of the other and then put together to make another 4'x8' work table with shelves underneath. They also hold bins of fabric. Now the new shelving is holding tons of frames, finished art work on stretcher bars, paints, silk screens, rolls of fabric, batting and tons of other stuff. There is still some space but for once I have my special papers laying flat on a shelf under the work table. One of my 6' tables is just folded up and the other one still have piles of stuff on it that I need to get sorted out. It is the place that I can sit down and work on collages and mixed media stuff. Another 6' table is still piled high with stuff...fabric to be ironed, work that needs to be finished, etc.

But today, I spent five relaxing hours back in the studio. I am back on track and ready to go full speed ahead.  Some of that time was spent cleaning up for then several hours were spent on collages.

I have a lot to share but don't want to spend all night doing it so this is just to help bring everyone up to date.

My Better Art by Design class will go on line again, starting the first of February. I will start taking sign ups later this week.

thank you all for your patience as I frittered around...it is now time to get back to the business of making and selling art....what a concept!
Posted by lizzieb 6 comments: