A New Year just for me!

I am so happy that the second half of 2013 has come to an end.  It has been a rough half of a year for me and it started out so well. The first half of the year was immersed in my art, taking a class with Gerry Brommer in Idaho, starting a post-baccalaureate certificate program at UC Extension in San Francisco, taking an on line class on working in a series with Elizabeth Barton, and then taking several classes on line with Jane Davies.  Each teacher I have had has helped me to reach farther and farther into myself to seek new ideas and ways of doing things.

In June my father began declining and fell in the house which resulted in a broken thigh bone at the hip.  He was sent home with a catheter which he continued to pull out each time it was reinserted. He lived in Berkeley with 37 steps from the street to the first floor of his house which means an enormous charge for any wheel chair service to take him to the doctor.  Most of the times he went back to the hospital to the ER via an ambulance since he was not mobile at all.  Finally, after two weeks of spending many evenings and days at the hospital, he was found to have a very low sodium level which resulted in his hospitalization.  However, they would only keep him until his sodium level went up.  However, the urologist didn't want him to leave until they had done some minor laser surgery so he could urinate.  But they couldn't do the surgery until his sodium level was up.

I have had a wonderful caregiver who has been living with my father for the past six years.  I couldn't have managed without her care and support of my father and myself.  We would split shifts at the hospital since my father was pretty deaf, fairly blind and had very short memory if much at all.  One time I went downstairs to get something to eat one evening, told the nurse I was going so she could watch out for my dad, cam back to find three staff trying to hold my father down to reinsert his Iv which he had also pulled out.  Needless to say, I didn't leave his beside again unless Roz was there with him.  I had the day shift and she took the night shift.

He was in the hospital for two weeks. Meanwhile my husband left on a pre-planned vacation in our motorhome with our daughter and family in their trailer up California, Oregon, Washington, Idaho and into Glacier National part...finally arriving at Yellowstone.

My father had his surgery and was doing much better at home in his own surroundings. He was no longer continent but we could easily deal with that.  Roz encouraged me to go join my family on vacation since we were also going to go the Michigan for my granddaughter's first birthday.  Spent lots of time on the phone with home health care, hospice, etc trying to decide from a distance what the best next step would be.  Returned home and decided to get him on hospice right away as he was seriously declining as a result of severe wounds to his feet, ankles, and shins from traction when he had been in the hospital with first time.  Within a week of my return home, a died peacefully at home with Roz, my brother and I there with him.  I called the rest of the family and called my priest who came over to say some prayers and be with us and we had a good ole' wake there at the house until we were finally ready for the mortuary to take his body away.

Since that time I have been very busy dealing with the house and all the legalities and working with my brother on things. I am handling the estate and it looks like we might wrap everything up by March or April of the new year.  I am truly looking forward to that. Meanwhile, I have brought boxes and boxes of papers home and have burned up my shredder going through all of his tax returns and cancelled checks and other stuff from the past fifty years. I have vowed now to leave all that to my daughter when my time comes!

I have been going through many different feelings of grief, including feeling overwhelmed (which I have been) to just to sad to do anything.  My art has taken a back seat to the rest of my life.  Christmas was a little low key and much more relaxed as the house never did get completely cleaned up but my son, daughter-in-law and granddaughter didn't seem to  mind.  For a week had my entire family, four more adults and three grandchildren here in the house most of the time.  My son and family returned in Michigan on Saturday and now I am just watching my two grandsons for this week while school is out.

But, BUT, BUT I have returned to the studio.  I began doing some work on a piece I had started several years ago and am getting the top ready to paint over it and then do a lot of quilting on it and some more painting.  And I have pulled out a lot of the left over pieces from one of Jane Davies' classes and have started to work on those again.  And, I have set up a bunch of 4 x 4" bristol board all ready to started working on on a daily basis...let's see if I can keep that up for the year! Lots of plans for the new year, including two more classes this winter at UC (contemporary art history and intermediate painting) along with a masters program with Jane Davies for a while as we work on various things.

so, if you have stuck with me all this time, I will include a couple of pieces that I did during the late spring time....they are, however, indicative of the way I seem to be going right now...working in many layers.  Each of these is mixed media with collage and painting, stamping, etc. 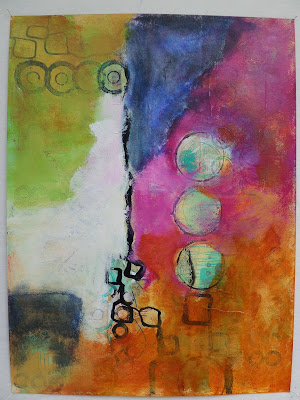 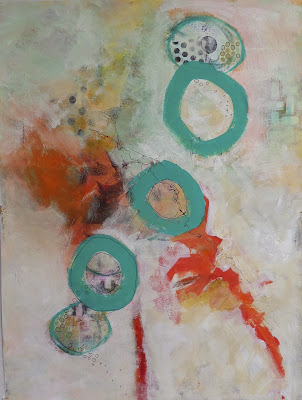 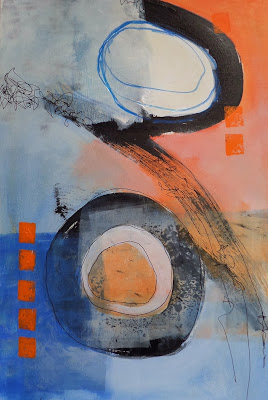 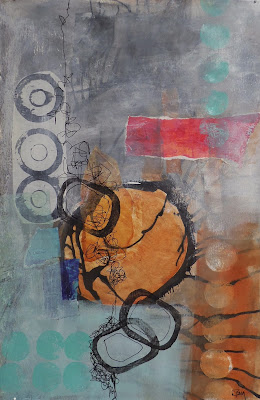 Now, I have made a commitment to myself to keep up the blog (especially since I had to delete five hundred spam messages that had appeared!) and to keep up with my work. I finally feel like I am returning to myself again!
Posted by lizzieb 6 comments: