So much has been happening

I truly apologize for being gone for so long and neglecting my writing.

For the past two months  have had a lot of ups and downs with my art work. I have been very excited about some things I have been doing and new directions I have been taking and then wondering if it is the right direction. So let me tell you how this has all developed.

Earlier this year I began doing some work that was much simpler, painting on canvas, collaging fabric on to it, stitching and then cutting it to fit prestretched canvas. I did a number of these and was really enjoying it. 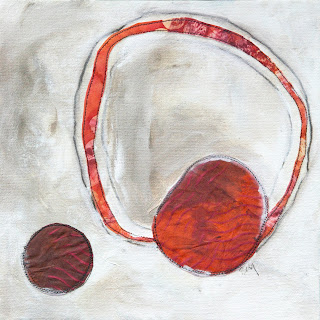 My work has started to become much more minimalist. The use of lines and circles has become extremely important.

Then I started doing a bunch of mark making on my IPhone...I love this thing! I have created pages of these on my phone and have printed them out for contemplation and consideration. It has begun to feel like my own alphabet. Again, lines and circles along with other shapes such as triangles and squares. 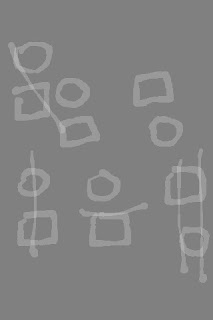 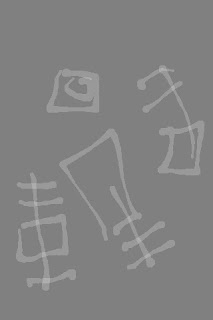 That got me thinking about mark making, and of course, one of the marks that I create the most is a circle. While I was making the accordion books, I was painting on water color paper with inks and acrylic paints. I also did a lot of linear mark making on them, using my new found favorite painting thingie, a stick off of a vine near my studio. I love the lines I am able to make with this stick. 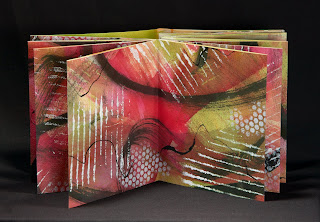 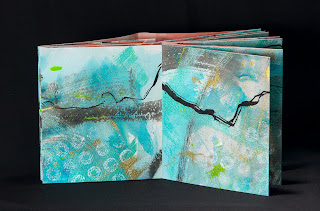 These accordion books have had multiple layers applied to them. It is really a lot of fun working with a whole sheet of watercolor paper and then creating the books which become separate compositions. I love the serendipity of this project.

I then started doing thumbnails of pods...from my own creation, but these have come out of a lot of thought about home, safety, nourishment, loving, cocooning, etc and I began making a number of pieces on painted canvas and then sketched in with ink  and then stitched in a free motion style, again creating circle shapes and lines. And again, the lines are all very organic. 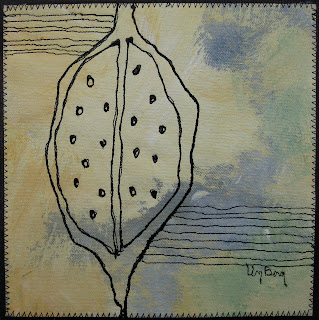 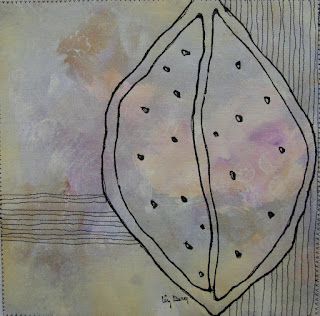 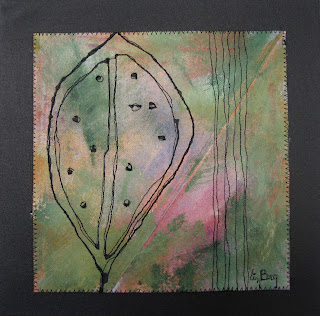 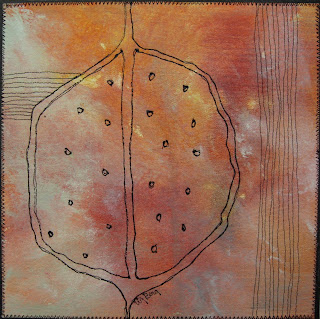 Each of these are actual quilts, with a backing and batting. They have been finished on the edges and then mounted on painted stretched canvas. They start at 6 x 6 inches and move up to a canvas size of 18 x 81 inches with a piece of art on them that is about 16 x 16 inches.  These four just represent a few of the pod series and I have many more in me.
So back to the mark making. Since I was painting on unstretched canvas, I slapped some gesso one a large piece of canvas, about 3 x 4 feet in size. I then began making marks on the canvas by dripping it out of a paint bottle and allowing it to dry flat. As a result, the red paint actually stands up and is not flat and has a shin to it which contrasts nicely with the blotchy white. I machine quilted it using a hard sharp line, another contrast. 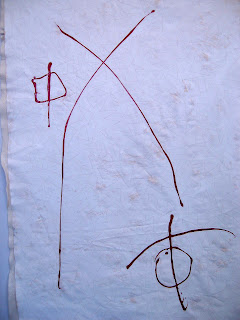 Boy, now I am really getting minimalist!

I had come across the work of Rebecca Howdershell, who works on industrial felt and paper and stitches them together. These are white on white compositions which are stunning. So back to my sketch book I went and I started drawing lots of thumbnails of various shapes and lines.

This also began the search for industrial felt. I now know more about industrial felt than I ever imagined.
I have spoken with various people trying to speak in a language I am just starting to understand. Having never seen industrial felt before but reading a lot about it on line, I came up with some ideas of what I wanted. I had circles cut out of industrial felt in various thicknesses from 1/4" to 1/2" and the circles themselves range in those sizes. The first company agreed to ship the waste that they throw away to me for the cost of shipping. (little did I know what I was getting in for) And then I contacted some other companies and finally settled on one company and ordered 2 sheets of industrial felt in white in an 1/8" and 1/4" thickness. I also order circles cut out of 1/8" thick felt that are 1.5" in diameter.

And then I waited, and waiting for stuff to come. 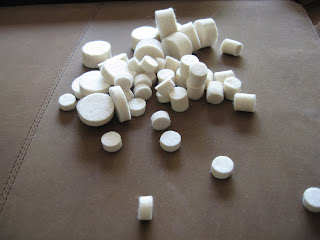 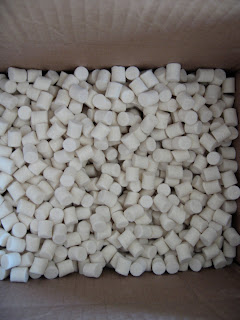 1000 circles of cut industial felt...1/2" high by 1/2" wide
First  the box of cut circles that were smaller. They arrived and I had four thousand felt circles of various sizes and thicknesses. But nothing to do with them yet. I had some ideas from a book I had gotten on felt when I was at the Surface Design/SAQA conference and was eager to work with them but did not have a base for them yet.

Then two huge boxes arrive...one I can not even lift and it sits in our entry way in the way.
I tore open the smaller one and found dark grey industrial felt that was the waste from cutting out gaskets. 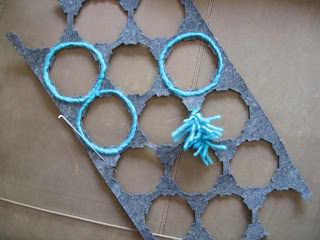 I also opened the other big box and found a huge roll of grey industrial felt that is about 24 " wide and rolled into a tight roll about 2.5 feet in diameter, with small circles cut out of it.  I have died and gone to heaven.  My husband said he wished he had had a camera when I opened up that box. Still thinking about ideas.

But then the sheets of felt finally came and then I was off and running. Right away I sat down at the sewing machine and stitched lines in and then took some of the felt circles and needle felted them to the background piece.  Then I added a short piece of red wool yard, which was needle felted down. I am having way too much fun with this now! 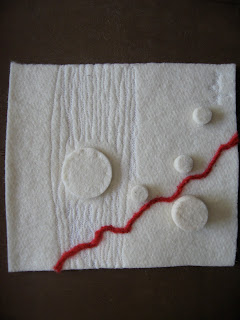 this is sidewards but how cool is this!  Too much fun!

OK, so then I go off to the studio with my 72 x 72" inch sheets of white industrial felt.  I am in Seventh Heaven!  Whoa, watch out for me!

I cut pieces and then start playing, first doing a lot of stitching, this time using George which absolutely loves sewing through the felt. 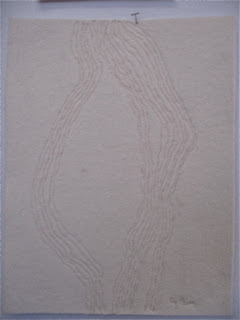 This is just a snapshot taken and unfortunately, it it off white thread on off white felt. But you can kind of get the idea.  And then another 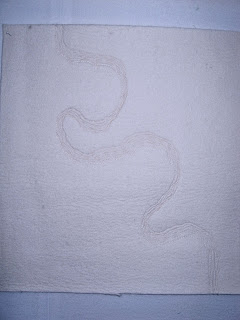 But, what I haven't told you is about another artist whose work I came across. Kazuaki Tanahashi gives workshops and I would love to take one of his. He has been a life long student of Zen and one brush stroke painting.

As a  child and then again as a teenager I lived in Japan. I took sumi-e painting, along with my mother but I really did not enjoy doing the stylized paintings. My  mother continued with lessons from a master sensei and became a certified teacher of sumi-e.  I was drawn to calligraphy even though I could not read the writing. I loved the movement and strength of the brush strokes and while in collage I did a large etching utilized brush strokes to create the etching plate. Very Japanese in character.

I have found myself using that type of writing, although it has not recognizable characters in it, in my surface design when I want ot have a sense of text without having something that is legible. So finding Senei Takahashi's work and information about Zen just drew me in.  Five books later, I am still studying the art of the brush stroke and keep at it. 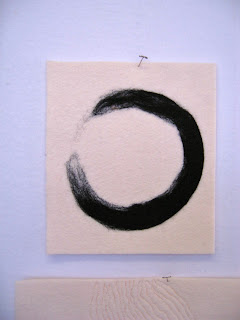 But this led me to some beautiful black wool roving I purchased at the SD/SAQA symposium....and before I knew it, I was creating my own Zen circle...a very different method than using a brush but I love it.  Without realizing it, I have been making this circle for years and it shows up in my silk screens and painting.  Now I understand why.

Not stopping there, I went on to make a couple of other characters that I had created 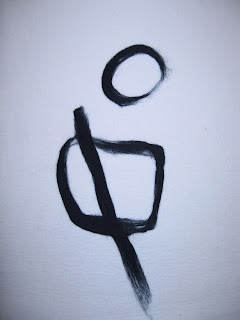 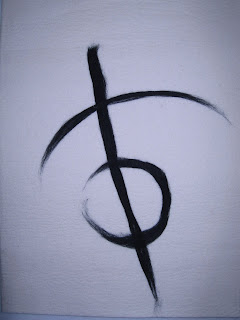 This last character is also in my big red and white piece. Circles and lines.

So I am on a delightful journey, finally feeling like I have truly found my art. Sensei Takahashi speaks about the emptiness of self as being extremely important in bringing the art from within into a form which others can see.  I have so much to learn but it is all coming together.