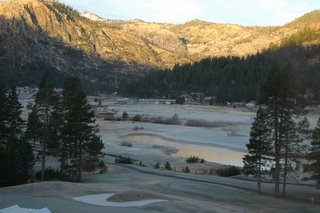 Sunrise out of our window 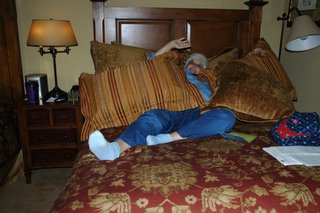 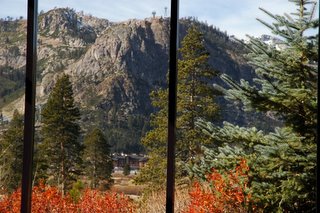 out the huge window in the lobby of the resort 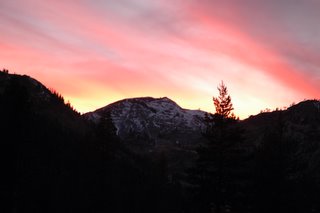 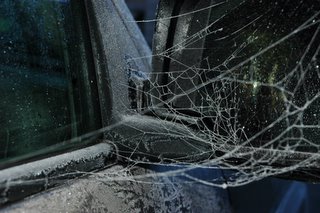 frost and spider web with frost on my truck mirrow.

I am including some pictures from Art Quilt Tahoe...none of my work...that will start getting finished tomorrow.

Tomorrow...I can hardly wait...I actually have a few hours of my own time! Ever since I got home that has not happened, plus I have been suffering from this darn cold and now I am starting to feel better. Sandwiched three pieces (one from Rayna's class and two from Charlotte Yde's class) so that I can get started on the quilting part and see what it really looks like!
Posted by lizzieb 4 comments:

There is definitely something wrong here!

I woke up, had my shower, and there weren't two shower heads gently washing my body...only one.

No one put out clean towels for me.

No one put out nice little bottles of shampoo and lotion for me.

I went downstairs, and there was no breakfast buffet waiting for me...no tempting sweet rolls, no cooked bacon or sausage, no melon cut, no pineapple, no berries, no salmon, no special egg dishes and most of all, NO OMLET MAN waiting to take my order for my own personal omlet! In fact, there weren't even any eggs in the refrigerator...so it was cream cheese on Triskets for breakfast.

And instead of spending the day working away in my studio, I am washing clothes, unpacking, taking my Dad out for his weekly errands, and then maybe I can do a little work...

And then, tonight, I get to watch the videos of my grandson's first birthday which I missed while I was in Tahoe. The weather was so beautiful there and I have come home to spring-like weather here...oh, this is why we live in the San Francisco Bay Area!
Posted by lizzieb 4 comments:

Well, I'll be darned...Claire Fenton went and tagged me for the 20 list...had to go through other people's blogs to see just what I had to do...Claire wrote lots of stuff but then I looked at Gabrielle's list and it was much shorter. Must say I had noticed these and had read them but didn't realize that one get's tagged! See how out in left field I am? Just don't have all this protocol down!

1. I was born in Texas and consider myself a Texan although I have only lived there for two years when I attended Trinity University in San Antonio.

2. I am a honest to gosh red head whose hair has gotten darker over the years and I don't color it...there really is grey in there if you look hard enough!

3. My father was in the Navy and we traveled all around the outskirts of this country....not very many Naval bases in the midwest, although we did live on an Army post at Ft Campbell KY for a year...that was fun during the Army-Navy games...we had a beat Army sign in our window!

5. I taught English conversation to a group of students at Waseda Univeristy in Tokyo where I was able to hold my own when they discussed intergration in the US (I had attended a middle school in Virginia just after the public schools were reopened after being shut down for two years in response to the order to desegregate them)

6. I graduated from High School in Hawaii...from Waianae High and was one of a very few haolis at the school.

7. I majored in art for two years and for 1 1/2 of those years, my roommate was also an art major and we would stay up late at night pulling prints from our woodblocks...had clothes lines strung around the room with prints hanging from them...didn't get to sleep until 4 am.

8. Went to my 8 am class the day after in my babydoll pajamas under my trench coat...the private Presbyterian school did not allow the women to wear pants on upper campus where all the classes were...and my 8am class was a religion class...

9. Rented a house in the community of the school with a group of art students and music and drama students so we would have a place to hang out...everyone not a senior had to reside on campus and we had curfews, etc. Lots of interesting things went on at that house...I built myself a stone carving table and would work on carvings with my hammer and chisels outside. Parties at night.

10. When I left Trinity to go to the University of California at Berkeley in 1967, the dean of women told me she felt I would be much happier there...I wasn't.

11. Attended UC Berkeley (Cal) during riots. Changed my major to social work as the art department and I didn't get along very well...surprisingly, Trinity had been much more open to differences in styles of work. The best thing I learned from Cal was how to weld.

12. Met my husband at the shooting range where I was quite proficient with a rifle.

13. Although my mother outfitted me in a wonderful trousseau, I spent my honeymoon in blue jeans, tee shirts and boots as we wandered around Yosemite in the fall.

14. Art has always been a very important part of my life, even when being a mother, probation officer, wife, Girl Scout leader, etc., etc., took up all of my time.

15. As a probation officer I specialized in working with sex offenders...both adult and juveniles. I know just about everything that can be done to a person and how ugly people can really be.

16.The balance of my case load was usually women drug and alcohol offenders who, surprise, surprise, had been victims of sexual abuse in their childhood but never told anyone before they got to me...

18. I stay away from a lot of political statement making because I have been around a lot and have seen both sides of everything and I just don't want to...my head is not in the sand, but I can't do much about it myself so I work one-on-one to create change where I can.

19. I am an extremely spiritual person but did not feel good about organized religions until I joined an Episcopal church and found people seeking answers as much as I was.

20. I cannot go through a day without doing some type of art.
Posted by lizzieb 5 comments: 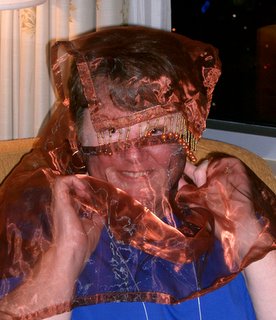 Linda Minton took a great photo of my while at Houston...thought I would share it with everyone so you could see the "real me". Actually, I think this is one of the best pictures ever taken of me...I can hide a lot behind that fabric. Actually someone had purchased the fabric to use as a table runner since it had the beads on both ends...being the fool that I am, I decked myself out!

So, for those of you who have lots of self portraits showing up on their blogs, I now have my very own portrait...of course, it isn't a self portrait but it will have to do!
Posted by lizzieb 6 comments: