It is now October and I have been away from my blog for the past ten months.  I have felt some guilt but then I knew that no one would be interested in the trivial doings of my life this past period of time.

My husband, in a fit of trying to get work down on the construction of the new garage and studio, was up working at 10 pm one night and, instead of moving the ladder over, he reached over, lost his balance and fell 8 feet to the floor, shattering one lower bone and breaking the other.  This resulted in a trip by ambulance to the hospital, and then a couple of days stay after surgery.  He returned home in great pain and trying to lay down on the couch but could not get comfortable.  So, it was time to move a recliner into the living room as well as to get a small TV.

One week later from the break, he was back in the ambulance headed to emergency because of severe pain in his back.  He had developed about 15 pulmonary embolisms which required another stay in the hospital and blood thinners.  Then I had to keep my patience for the next couple of months before he became much more mobile and could get around with crutches.  Of course there was home nursing care for a while, home physical therapy appointments and visits from the clinic that supervises the blood thinners.  Once he could get around the down two steps with his crutches, it was time to take him back and forth to all the appointments.  Needless to say, not much got done around here.

But time marched on, he healed, but still can't walk for long, and I started back to working on my art. But I found myself blocked.  I worked periodically on the Grand Canyon which has tons of stitching in it but my shoulder would tire.

So, not able to settle down into art, I started moving into my new studio and with the help to two strong young men and a big truck, we made two trips from the Oakland studio to home and they were able to get everything upstairs.  I had already had a Ikea-putting-together party when we got lots of shelving, and cabinets built with the help of great friends and my two helpers!

Then it was time to start organizing and getting things put away.  It was nice until I started moving things in from my old studio at home which still held a lot of stuff!

Still couldn't get into making art so I made two baby blankets for the granddaughter-to-be, and started cleaning out a bin that was full of partially made panel quilts, etc and just started quilting them.  Nothing fancy, some pieced things, some printed panels, some old class work, etc.  But it felt good to see the pile grow.  I still have about ten more to finish after finishing about ten of them.  The finished ones will go to various people and are also great to hang on to for the baby that shows up around church.

And then we were off in July for a seven week journey to Michigan and back for the birth of our granddaughter, Myrnaleah.  We wandered through northern California, the eastern side, eastern Oregon and Washington, and then traveled on US 2 which is just below the Canadian border. Went through the panhandle of Idaho, into Montana, through North Dakota and into Minnesota and dropped down to the cabin of a cousin to spend several days on the lake.  Then off to the north coast of MN, across Wisconsin, and into the upper peninsula of Michigan. Our granddaughter was born while we were up there but by C Section so we took our time headed down to Lakeview, northeast of Grand Rapids.  We arrived and the other grandmother had to return to work.  This was her first grandchild so we felt we really didn't need to rush since she was there.  We stayed for two weeks and just enjoyed ourselves and got to know this sweet little girl.

And then we headed home via Rout 66 through Illinois, Missouri, 13 miles of Kansas, Oklahoma, the panhandle of Texas, New Mexico, Arizona and back to California.  We have now settled back in to home and I am still trying to get moved in to the new studio...this will take a while.  But I have finished the Grand Canyon and another pieces but both are awaiting their finishing hand sewing of the facings.

To get myself jump started and to get that focus and disciple back, I am taking Elizabeth Barton's online class through Quilt University about working in series.  It is fun to be back in a class setting and seeing all the ideas the other students bring to the group.  There is a lot of sharing of websites about various artists off all sorts of media and I am really enjoying this.  I am also enjoying the structure and exercises we have been doing...feels good to get back into that groove.

But, during all this time I have been doing a bunch of paper collages as creative exercises. I have an art magazine which has beautiful heavy paper with lots of announcements about shows which use wonderful colors in their displays.  I have been tearing these papers out as I go since the magazine is over half an inch thick and this gets rid of some of the paper and our of my house.  I have kept inspiration notebooks for years and always clip things that I like to paste into the books.

So, I thought I would share a few of these collages.  None are for sale, they are all done in a sketchbook and are back to back so I would not even think about selling them as I was working.
Hope your e 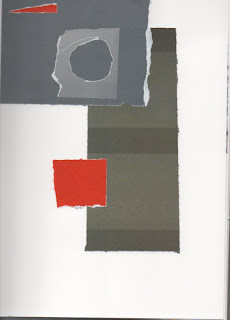 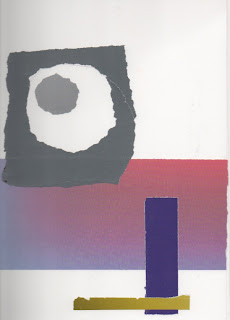 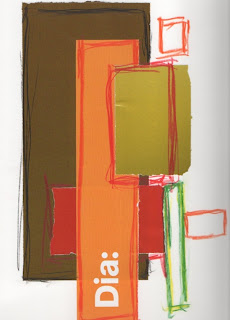 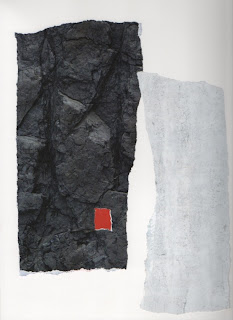 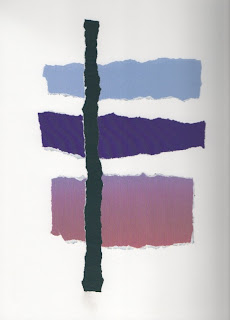 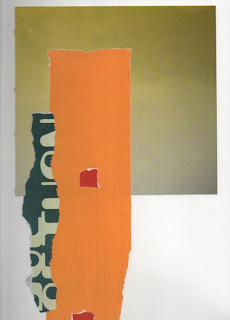 Just fun things to do...usually torn paper. there is a shadow on one side from the scanner.  I am reminded of how much a prefer things that are clean and simple.
Posted by lizzieb

Wow! You have had one heck of a time! I hope your hubby is no longer in pain. If I had known you were driving through Ea. Washington, I would have packed you a picnic lunch. So sorry about the art situation. I hate when that happens. The more I fight it, the more frustrated I become. Have fun in the new studio and PLAY!!!

Liz, Glad you are back to art making - it will all come back to you once your studio is settled! I have always loved your work and am looking forward to seeing more. Best wishes to you & your husband that you'll be returned to good health.

Liz...it's been ages since I've connected with you..just read your latest entry on your blog and glad to hear you BOTH are doing better...wow, what an ordeal...and that you are "back" to making art...love your drawings and torn paper...and I'm sure you will love having your studio back at home and in a new location...think of you often & so glad to hear you are doing well..you are a fighter and a survivor..keep on creating wonderful work..Louise

Liz, I hope writing about your difficult months was helpful, and you are mistaken about our being interested in your life. You are on my Google reader so I will not miss your posts. After caring for my husband through 10 years of Parkinson's, I can identify with what that does to creativity. But keep moving in and organizing your studio, and the QU class is great for getting a fresh start. Self-expression is a great healer.
Martha
http://www.marthaginn.blogspot.com