Got my MoJo back!

I have been having a number of very good days in the studio.

I started a class given online by Elizabeth Barton on creating a series through Quilt University. I have long been an admirer of her work and since I have been off my art lately, I felt this would be a good thing to do in order to get me focused again.

Her lessons have been good, especially helpful for me are the parts about starting a series and how to create a series.  I did a number of exercises to warm up and have settled on a series now called "Intersecting Triangles". Originally I did a bunch of thumb nails and then did a bunch of paper collages using various shades and tints from black to white. Then, last week while I was in Pacific Grove for six days, I did 14 small fused samples that are 6 x 6". So when I returned home I rushed out and bought three shades of gray cotton and washed it and was ready to do.  Ironed fusing on and away I went, cutting backing, batting and various shades of background fabric. Thursday I had gotten one piece that is 22 x 22" fused.

Today I did the quilting on it and then did the cutting and fusing on number 2, and quilted it.  Both still need to have their binding put on.  And then I started in on number 3, cutting, fusing, and then quilting.  I am half way there on the quilting. 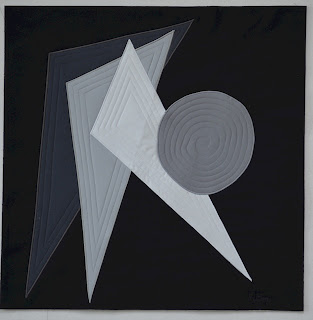 This is number 1 which was done exactly like the small sample which was 6 x 6. 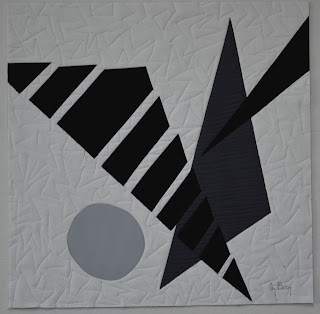 And this is number 2.  I am really having fun with these and have tons of ideas of ways to take this series.  I am also enjoying working in black and white instead of color, for a change, but the series will grown to incorporate color and printed fabrics.  We will have to see just where this all goes.


I have also been busy getting the facings done on this quilt which is rather large.  It is fused and then very heavily stitched.  The shapes have satin stitching around them. 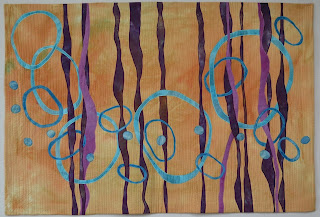 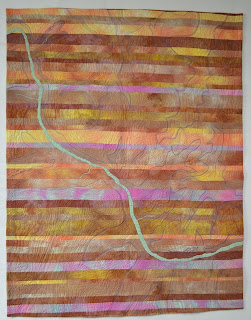 And,this is my Grand Canyon Topo map...it is almost six feet tall.  The green is the Colorado River which has created the canyons.  It was great fun to go back to the Grand Canyon a couple of weeks ago and have my sense of color confirmed.  I used strips of hand dyed fabrics in colors I have seen at the Grand Canyon, and then, working from an actual topographical map I started stitching.  This was started last fall before I broke by arm.  Then when I was ready to start working on it again, I couldn't find it after the move from my Oakland studio to my new home studio.  When I did find it again, Doug had broken his leg to it took me a while to figure out where I had left off on the map but I am so happy it is finished.


So, the ideas are flowing, the time is working, I am very healthy and eager to work.  What could be better than that!

I have noticed on my stats that I have a large number of visitors from Russia.  This fascinates me. If you are one of those visitors, would you please leave a comment?  I would love to find out how you got here!
Posted by lizzieb

I'm not from Russia, but love both your new pieces and the Grand Canyon one. Lovely worl

I have always loved your aesthetic. I am so happy to see you creating again.

Viewers from Russia, Ukraine and Malaysia are usually wanna-be spammers. Automated searches explore the Internet, probing for opportunities. They are the 'robots' you are protecting yourself against.

gee whiz, Chris....you popped my bubble! and here I thought I actually had people coming to my blog!